I was born in Coventry, West Midlands on 1st January 1955 . We lived as a family, in Cumbria and Scotland, before settling in Chatham, Kent in 1963.

I attended St Michael’s RC Primary School and St John Fisher RC  Secondary, both in Chatham. I spent 20 years pursuing a career in administration and office management before commencing studies for the Catholic priesthood at St John’s seminary, Wonersh in 1991.

I spent a year as a deacon in St Vincent de Paul parish, Clapham Common, before being ordained priest at St Michael’s Chatham on 14th June 1997. I was appointed assistant priest at Holy Innocents, Orpington until October 1999, following which I served as a full-time chaplain at King’s College hospital, London.

My first appointment as a parish priest was to Sacred Heart, Sittingbourne, in 2004 where I remained for 7 years.

In 2011, with the Archbishop’s permission, I took a break from full-time parish ministry to care for my mother, who was suffering from dementia. 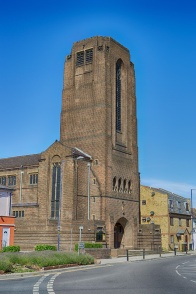 After a couple of years as Parochial Administrator of St Simon Stock parish, Walderslade, I took up my present appointment, in Northfleet, in October 2016.

I have a brother, Kevin, and a sister, Maureen.

Ministry of the Word

To understand why one should become a Eucharistic Minister, it is important to reflect on these words  : “Yours is a share in the work of the Lord’s Spirit who makes of us one bread, one body, the cup of blessing. Yours is a work of ministering Christ’s body and blood to the body of Christ, the Church. Yours is service at the Lord’s reconciling table. You minister holy food to holy people in the holiest of all communions.”

The role of Eucharistic Ministers in our parish of Our Lady of the Assumption is a wonderful ministry – to minister the Body and Blood of Christ to the assembled faithful and to take the Eucharist to sick and/or housebound parishioners, who are unable to get to Mass.

In reality, the role of each Eucharistic Minister is to draw faith from the people of God, to become more and more like the Body and Blood of Christ. Extraordinary Eucharistic Minsters serve many functions. From faithfully distributing Holy Communion at Mass, to leading prayer services in the nursing homes and taking Holy Communion to the sick and home bound, this profound ministry in aiding the ordained clergy of Our Lady of the Assumption Church is integral to a life of faith and joy in our Catholic Tradition.

Eucharistic Ministers must be in good standing with our Catholic Faith, able to receive Holy Communion themselves, and be properly disposed to serve the faithful readily. Speak to Fr Michael if you are interested in this ministry.

The term “folk group” is perhaps old fashion and we prefer “guitar group” simply because the name reflects the instrument we play.

Guitars were first introduced to Our Lady’s in the early 80’s, when a Curate, Father David Corbould, came to the parish. He offered to give free guitar lessons to anyone interested, on condition that when he thought they were able, the new guitarists would play during Mass. Over the years the group has had various changes in “line-up” with Viv Brett being the longest serving, from the original group, and the only one that still plays.

Tony Atherton came to the parish in 1983, over 30 years ago. He had much more experience and soon the guitars (not actually folk) were playing a wider range of music, parts of the Mass as well as hymns. While our style is a little up-beat and we add our own interpretation, we try our best to lead the congregation in singing during Mass. More recently Tanya Fernandes came to the parish, adding to our repertoire and different styles of playing.

The kind of music we play can be best described as uplifting as well as prayerful which we hope meets with the vast majority of the congregation. When choosing the hymns we always attempt to reflect the readings of the day.

The Guitar group plays regularly on 1st Sunday of each month (except August) and on other special days. We would be very happy if any parishioners would like to join us, either to play or to sit with us and add to the singing.

The first Children’s Mass began in January 2017, with a small group of musicians/singers and children, consisting of Margaret Day, Phoebe Fogarty, myself (Tanya Fernandes) and my children Mya and Andre. Our aim was to make the Mass more child and family focused, by introducing uplifting hymns and songs that the children were learning at school.

Since then we have been playing at the Children’s Mass on the 2nd/3rd Sunday each month.

Our vision of the Children’s Mass at Our Lady of the Assumption, is to inspire and support all children in our parish in their spiritual journey and to give them an opportunity to be involved in the Mass more fully. We want to encourage the children to join in any part of the Mass such as the Altar Serving, Music Ministry, the Liturgy of the Word, the Offertory, the Collection and the Welcoming.

Looking to the Future

A year on, with the grace of the Holy Spirit and support of Fr. Michael Ryan, the Children’s Mass is proving to inspire the young children of our parish, who are now actively and enthusiastically involved in the Mass. Children from as young as 7 years old are now reading the Liturgy of the Word, singing, doing the offertory, and inspiring each other and the rest of our congregation.

This is just the start of our Youth Ministry and we look forward in wonderment to see how the Holy Spirit will work with us in our lovely Parish!!!

If you or your child are interested in being involved in the Youth Ministry at Our Lady of the Assumption, please contact Fr. Michael Ryan or Tanya Fernandes.

We start practicing hymns from 10am on the days of Children’s Mass. All are welcome to join us!